I can still remember when I got my first computer. It was a Leading Edge computer running an Intel 8086 with a whopping 512 KB of RAM and an internal hard drive of 10MB! Now that was a kicking system! I quickly learned that HIMEM.SYS and EMM386.EXE only worked with Extended Memory (XMS) and Expanded Memory (EMS).

I quickly learned what things broke the system and which things don’t. format c: /y? Bad! Deletes the drive data! command.com? It’s ok, though it nests a shell.

Well, after installing the latest Windows 7, I started to feel a little nostalgic. I kind of miss those days, back where the operating system didn’t take care of you and you actually had to have an idea of what you were doing.

It got the better of me, so I managed to get Windows 3.11 online and running inside of Windows 7. They got to say hello over the network! It’s amazing that technology from 1992 can still operate in today’s world!

Without further ado, say hello again to Windows for Workgroups 3.11! 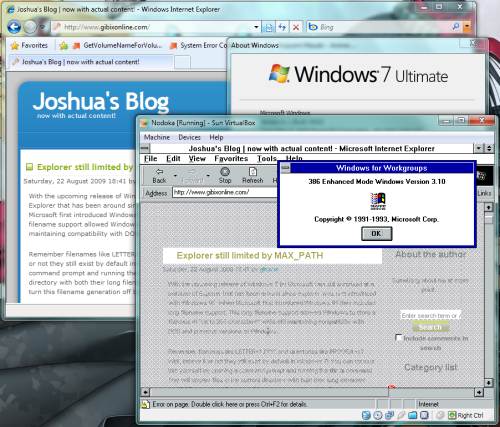